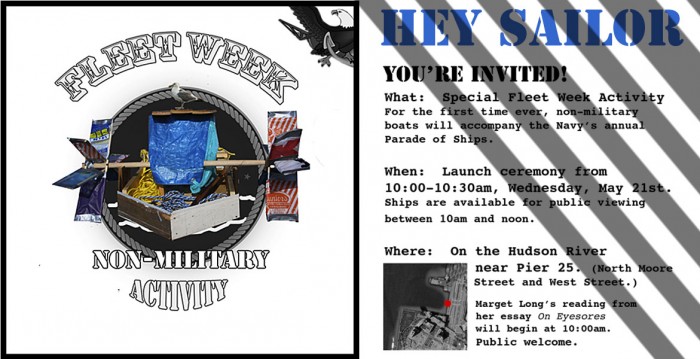 Mirage Viewing Station is temporary installation made for public viewing, thinking, and conversation about the optical phenomenon of the mirage. The viewing station was installed on the access road to the Bonneville Salt Flats, a four mile straightaway that ends in a cul-de-sac where travelers from Interstate 80 stop to look at the flats. The conditions on the salt flats—a super level surface with intense thermal gradients—often produce spectacularly beautiful mirages.

The Mirage Report, a text about mirages and their interaction with the salt flats was given to mirage viewers. Mirage Viewing Station was realized with the support of The Center for Land Use Interpretation.

Spirit of Town Halll, a reading and boat launch, coincided with the US Navy's Fleet Week "Parade of Ships." The original Town Hall flotilla was re-imagined and launched as part of the Navy’s Parade of Ships. I read from the text On Eyesores: Spirit of Town Hall and the Return of the Intrepid, which describes the recent development of Pier 25 and the future of ad hoc public spaces in post- 9/11 New York.

The Work Office (TWO) is a multidisciplinary art project disguised as an employment agency and informed by the Works Progress Administration (WPA) of the Great Depression in the 1930s. It was created by Katarina Jerinic and Naomi Miller. To fulfill our one-week assignment for TWO, which was to "document a need for repairs", Carolyn Dinshaw and I made the video, Is This It?, a rumination on a small urban space under perpetual renovation.