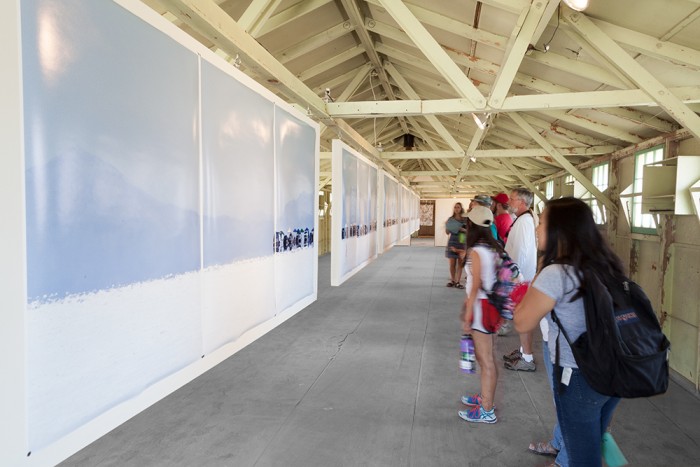 During the summer of 2014, I was a resident at The Center for Land Use Interpretation, where I researched and photographed mirages. This exhibition is the culmination of that research and field work.

Wavering outlines of people and vehicles were aligned across the entire expanse of the horizon. Every few minutes, explosions trailed smoke up into the sky. I was standing on the Bonneville Salt Flats, a glittering, flat basin, where it’s easy to think that you’re senses are deceiving you. Was this a distant army, or a mirage? As it turned out, I had been looking at the Hellfire Launch, a yearly amateur rocketry event on the flats. [To see the full resolution mirage photograph, download PDF here.]

I snapped a panoramic picture of that distant scene, then enlarged it many times over to produce the forty-eight foot paneled photograph installed at CLUI. The photograph, enlarged in this way, makes visible the distortion and doubling activities of the mirage. It also brings into view the intricately social and collective nature of an amateur event on this scale. It’s a kind of strange theater in the landscape—“these plays, this lusus naturae,” as Antonius de Ferrari wrote of mirages. But the image also breaks down: the digital file looses its optical fidelity when zoomed in on, much as a mirage disintegrates to the senses of one who approaches it.

Opposite the photo panels are texts about mirages that I found while at CLUI. The texts are taken from high and low culture, from sources as disparate and diverse as Aristotle, The Three Stooges, and the artist Joan Jonas.

I gratefully acknowledge the work of Andrew Young, whose bibliography led me to many of the texts that appear in the installation. I also want to thank Carolyn Dinshaw, with whom I have collaborated in mind and spirit on many aspects of this project, as well as Elena Glasberg, Michelle Warren, and Jill Cassid, whose deep engagement with my work has lead me to all kinds of new intellectual terrain. And to Ann Reynolds, who first connected me with CLUI. And finally, I thank the folks at CLUI for their generous support of this project and, more importantly, for bringing closer attention to the many nowheres that are somewhere here in the U.S.