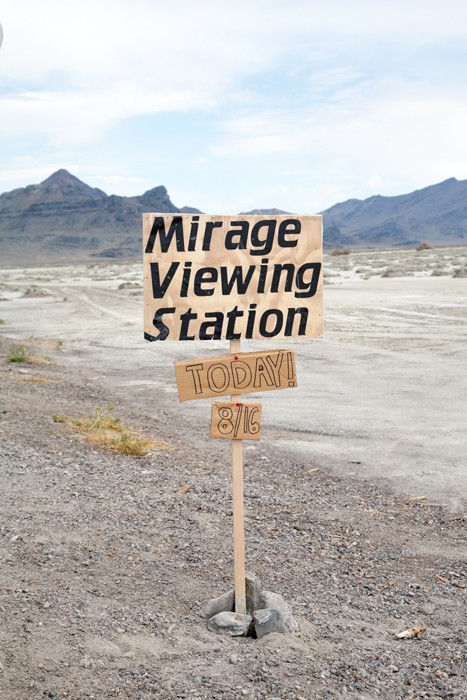 These photographs document Mirage Viewing Station, a temporary installation for public looking, thinking, and conversation about the optical and geo-physical phenomenon of the mirage. While a resident at CLUI, Marget Long built and operated the Mirage Viewing Station on the access road to the salt flats, a four-mile straightaway where travelers from Interstate 80 stop to look at the flats. The conditions on the salt flats—a vast, level surface with intense thermal gradients—often produce spectacular mirages.

In his treatise, The Pencil of Nature, William Henry Fox Talbot, one of the inventors of photography, described his new process as “photogenic drawing.” Long contends that mirages are akin to Talbot’s pencil of nature in the way that they use the earth, the air, and the sun to “write themselves into the landscape.” Though themselves supra-photographic media, mirages are not necessarily photogenic subjects. Noting this paradox, Long allows that, “to photograph a mirage is to drain the life right out of it.”

The viewing station was therefore Long’s effort to “bypass the human-made camera” and tap into a mirage’s potential as a continuous, live, imaging event. She created a space where people could take time to experience a mirage unfolding in the landscape and, as she describes it, “to let the mirages communicate for themselves.” In this way the installation became a public site for ‘refractive viewing’ as well as for conversation about vision, desire, imagination, the nature of the real, and the unknown.

The Mirage Report, a text about mirages and their relationship to the salt flats was available to viewers. Mirage Viewing Station was realized with the support of The Center for Land Use Interpretation.