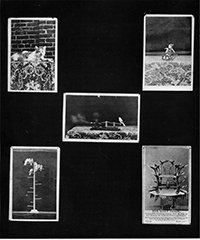 Visiting Cards are portraits of discarded household items--plants, board games, tube socks—that I found inside 359 Broadway, the vacant building that once housed Mathew Brady's 19th century daguerreotype studio. Photographed under Brady’s skylight, the new calling cards refer to the thousands of portraits taken in the space during the studio's heyday in the mid-1850s. The pictures also point to more recent artistic activity in the building. Artists lived and worked here during the 1980s and 1990s. At some point in the late 90s the building was cleared of all tenants and the interior of the building started to fall apart.

My Visiting Cards use the Brady Studio cartes-de-visite (pictured above) as a point of departure. Cartes-de-visite were small photographic calling cards introduced in France by André Adolphe Eugène Disdéri in 1854. This particular set of Brady cartes-de-visite are not typical. The casual framing and jokey, pet portrait subject matter suggests that they may have been made by his camera operators during down time, between customers; a diversion from the everyday tedium inside the photo factory.